Dembélé, Coutinho, and Paying Over the Odds for the Champions League

Barcelona played Lyon at the Nou Camp for the home leg of the Champions League round of sixteen. In the time since the scoreless first game of the tie in France, both Real Madrid and Atlético had been knocked out after failing to close the deal on their leads against Ajax and Juventus. Barça would then be the only nominally “Spanish” team left playing for the big-eared cup.

Seven of the last ten cups have been won by teams from Spain. Two of those finals were Real vs. Atléti Madrid derbies. Today, after Barça punished Lyon 5-1, they are La Liga’s only representatives left in the Champions League. Meanwhile, all four of the Premier league’s emissaries (Spurs, City, United and Liverpool) successfully stamped their tickets after years spent comparatively outclassed.

Barça went into the game with the domestic league pretty comfortably in their pockets. Though they hadn’t gotten a goal at Lyon in the first game, the blaugrana always have confidence for these occasions at the Nou Camp. It was last year at the same stage that Dembélé was set up for one of the goals of the season against Chelsea.

A year ago at the Nou Camp, Ousmane Dembélé was not yet a World Cup winner. The young frenchman had shown up to the team at summer’s end after going on strike from his club, Borussia Dortmund, in order to force the move to Catalunya. After arriving, he barely began to integrate into the team before he freaked his hamstring on an attempted flick against Juventus and was out for 106 days. 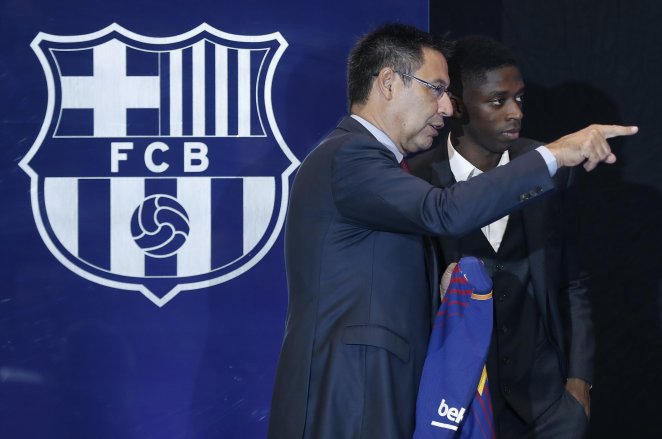 He was something of an unknown to most Barça supporters when he was signed for an obscene amount of money in the wake of the Neymar deal. It was seen skeptically by most supporters as a panic buy from the Bartomeu administration who had failed to deliver Coutinho from Liverpool in the summer transfer window. Basically the club lost their shiny heartthrob Neymar, tried to replace him with Coutinho but couldn’t, so settled on spending a hundred million on a young player most supporters hadn’t heard of, but fit the profile–and then he broke almost instantly when they took him out of the box. In the last sixteen against Chelsea, Messi found him with a pass that was delivered with encouragement beyond cooperation. Once Dembélé scored with it, Messi embraced him once, twice, several times emphatically. Vindicating the expectations around the young talent.

Now, a year beyond that public elevation of the starlet, Ousmane has grown in that accelerated way that teenagers do as they find their confidence. Unfortunately, he has continued to have disruptive injuries and has not gathered true momentum on the pitch for a sustained stretch in the starting eleven. This is frustrating for supporters, as his play is exciting and electric in a way no other members of the team are apart from Messi.

In 2017, Coutinho didn’t go on strike to leave his club like Dembélé did, but he did have a sour face when he scored for Klopp’s team. In the January transfer window of 2018 he got his move to Barcelona for a club record fee that could swell to the area of £140m. He was cup-tied for last season so didn’t get to play in Europe for Barça, and instead, had to watch his ex-team Liverpool play in the final (though they would ultimately lose to Real Madrid). This week, with Ousmane only able to play limited minutes over concerns about a knock he’d gotten in La Liga, Coutinho got to start in the front three with Messi and Suarez. Could he rise to the occasion?

He was active and occupied defenders frequently, but the final product on his involvement is still questionable. Many of his runs into defenders get him predictably dispossessed, leaving the rest of the team to scramble as they switch to press in defense. He did, however, score today off a generous assist from Suarez who was giddy to deliver it. 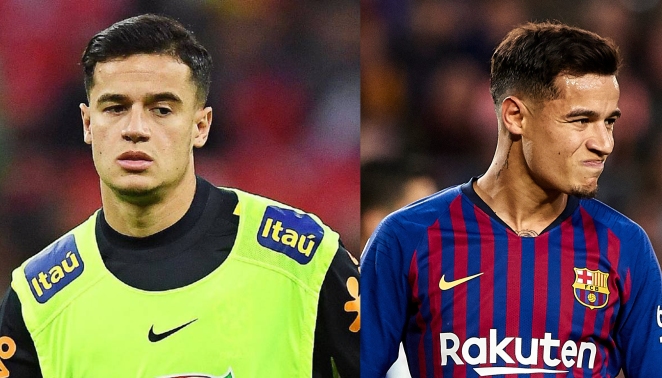 A Tale of Two Coutinhos

Though he started well in the fall, the underlying effort of his game has been strained and visible for defenders to predict. For Brazil, he can charge at the box and boss the attacking third. In shorter, denser national team tournaments where more specific organization isn’t practically possible–individualistic play is the default for flair creative types like him. But in blaugrana he gets tied up between trying to dribble past defenders with his head down, and looking to find the best pass option from the stars around him.

To keep the ball moving quick enough to fit with the style of play Barça is known for, the players need to constantly be taking pictures of the pitch and know where the next pass should be before the imminent one arrives. Busquets, who had a massive game against Lyon, is a master of this. Xavi and Iniesta were masters of it. Messi is one. These are pretty illustrious dudes to be compared to, but I feel Coutinho has his eyes more on the ball than the game.

In the first half Messi converted a panenka penalty (why are panenkas all the rage right now?!? Suarez and Aguero have done them recently), then Coutinho got the tap in. Dembélé replaced the Brazilian around the seventieth minute. At that point it was 2-1. A few minutes later Messi abracadabra’d a goal, seating a defender along the way. It was reminiscent of when the little man put Munich’s Jerome Boateng on his backside four years ago–the last season Barça won the Champions league.

After the third goal, the Lyon defense fell into chaos. Messi quickly found Pique on a marauding run that didn’t make much sense for the center back to be making in the first place. After the game he said that he saw Suarez was tired, so he started to do attacking runs. Pique loves to score. He has more rabid intensity and grinning accomplishment when he scores than when he makes ten clearances off the goal line in his own half. For a defender, there is a sense that their accomplishments are things that shouldn’t be overly celebrated. Like being able to afford car insurance. But to mark a goal, that is like winning a lottery, even though the effects on the scoresheet may be just the same.

Only a few minutes after Pique scored, Dembélé got set up by Messi and broke the ball through the keeper to find the inside left corner of the net. 5-1. A year after Chelsea, with barely fifteen minutes on the pitch against Lyon, Ousmane Dembele was once again the worthy recipient of the Nou Camp’s applause. Unfortunately, it seems the thigh injury he’d struggled with since the weekend was aggravated and he will be out of commission for an as-yet-to-be determined amount of time. A bright flash of talent that will, for a short while longer at least, have to return to the box.